To coincide with the centenary of the 1916 Easter Rising the Genealogy Radio Show is launching its new series "Revolutionary Roots" on Raidió Corca Baiscinn.

The 1916 Rising was led by around 1200 rebels insurgents from nationalist militia The Irish Volunteers, the socialist trade union group Irish Citizen Army and the women’s group, Cumann na mBan. It began on Easter Monday, 24 April 1916, and lasted for just six days. The leaders were executed in May of 1916.

All  the rebels aims are contained in the Proclamation of the Irish Republic, read aloud at four minutes past noon on the steps of the GPO by Patrick Pearse before the rebels mobilised. There are seven signatories of the Proclamation: Patrick Pearse, James Connolly, Thomas Clarke, Thomas MacDonagh, Sean MacDermott, Joseph Plunkett and Eamonn Ceannt.

The 1916 Rising features prominently in Irish literature, visual media and history education but it tends to focus primarily on aspects such as political ideologies, military tactics and the aftermath. The goal of "Revolutionary Roots" is to discuss the fascinating unheard tales of the families of the signatories and how each leader that signed that nation-defining document was shaped and molded by their ancestral legacies.

Dunne notes " it is fitting that Patrick Pearse begins our series. Pearse is a man whose family history is so richly diverse that it made him as he wrote himself in his unfinished autobiography ‘the strange thing that I am’.
Why did Pearse see himself as a strange thing? Was his family history all that bizarre? Well much like a coin, Pearse’s family background had two very distinct sides"

The first episode which aired Thursday, March 10th aptly examined Patrick Pearse whose reading of the Proclamation on that fateful Easter Monday marked the beginning of the Rising. The remaining 6 signatories will be covered in the coming weeks. All episodes will be podcast and accessible on the Raidió Corca Baiscinn website "rcb.ie". You can also tune in live every Thursday at 4pm from the website   www.rcb.ie  or on 92.5 and 94.8fm.

Christopher is an English and Media student at the University of Limerick currently on placement with Merriman Research under my guidance and is based at LEDP. He is a regular contributor to college newspaper An Focal and has had poetry published in the Boyne Berries literary anthology. He is a member of both the literary and historical society and has researched for today’s episode. He is also a talented debater and public speaker who won the Mental Health Ireland Public Speaking Project Regional Final. 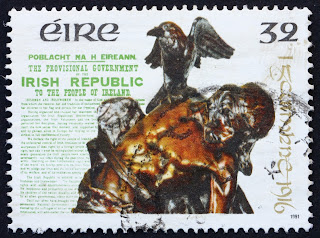