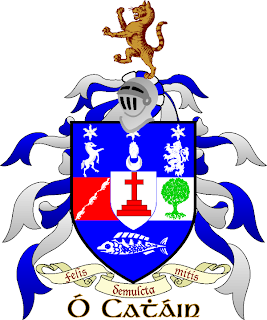 This talk concerns the Sept of O'Catháin, part of the larger Clan Owen; a fearless, dominant clan in North east Ulster. At one point almost two-thirds of the present county of Derry was under the control of the O'Catháin Sept. This did not come about by accident, but by skill in politics, diplomacy and war. Above all, it came about because of the strong kinship bonds inherent in Gaelic lordship. This talk analyses the growth of this Gaelic lordship within the framework of anglo-norman conquest and early expansion. It assesses the strategic tools employed by a gaelic lordship to establish an ideological traditional past through genealogy, marriage and propaganda in Medieval Ireland. The concepts of gaelic lordship are comparatively analysed with their European and Irish counterparts. It sets out to tell the story of the Gaelic Lordship of the O'Cathain Sept of Ulster. Descended from the Ui Neill Kings of Ulster, O'Catháin, O’Kanes, Cahans employed conflict, and political stratagems. Their rise and fall is parallel with Ireland’s passage from kindom to colonial status. This talk explores the personality of Gaelic warlord Domhnall Ballach O'Catháin revealing the world of Gaelic lordship where ‘there lives no tribe like the tribe of O’Catháin, …’first in place, whether at the feast or fight’. Considered greater than Kings, their territory encompassed north east Ulster. How they came by this territory, through annexation and warfare and expulsion of rival clans provides the themes of this talk. Their enemies were frequently blood brothers, rival clans and kinsman. The complexities inherent in Gaelic Lordship and the methods employed by the O’Catháin sept to maintain power at all costs in medieval Ireland provide the focus of this exciting talk on the O’Cahans.